I have talked in bits and pieces over the years about what WoW means to me. We were offered a chance to make a video for Classic – toasting to 15 years of WoW. I tried, but mostly it ended up being just me – overly excited – and rambling. So here are my thoughts, well planned and intentional, on paper.

In 2004, I was getting ready to graduate college. I had just spent 4.5 years getting a liberal arts degree. I was planning on spending the spring working and applying to graduate programs. I was not planning on playing WoW. You see, I had played a game called Dark Ages of Camelot (DAoC) for a semester in college. And I almost failed that semester due to lack of attending class. (Note: I still aced all my assignments and tests – it was just my school had a hard core attendance policy.)

“If I play WoW, it will become my life. So I am not gonna play WoW.”

A thing I actually said. Note – I was not wrong.

I had applied to graduate programs, and even got a full assistant-ship to SMU. BUT, while doing my grad school research, I discovered a program called the Guildhall at SMU – a masters level game development program.

6 weeks into the program – a friend of mine (thanks Kyle!) – convinced me to play WoW with him. He even bought me the game.

I made a Forsaken Mage. I got to level 22. I almost quit because it was “too hard”. See, I was still thinking of things from a DAoC perspective, and I wasn’t learning any of my frost spells. It was hilarious.

I ended up making a Night Elf Hunter – as everyone said it was the easiest class to play. She would be my first level capped character. 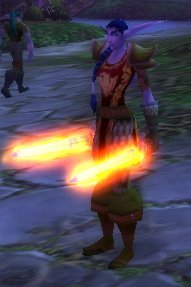 These days I play an affliction warlock, but I am a terrible altoholic. I can’t wait to play WoW Classic and revisit my treasured memories and past.

Classic was such a huge influence on me, and set so much of my life into motion. I remember that first time, running from Teldrassil to Ironforge. That first time crossing the bridge into Duskwood. I couldn’t get to Booty Bay on my own, and a very kind dwarf paladin rode along beside me the whole way, killing the monsters that attacked me. An escort quest he got no exp or loot for, lol. I ground from 56 to 60 on my hunter killing ghosts on the frozen lake in Winterspring, occasionally stopping to go farm the yetis for leather. While killing those yetis a Lifestone dropped. Having no idea, I equipped it. Everything really is hunter loot. I was able to afford my epic mount from selling runecloth on the auction house. 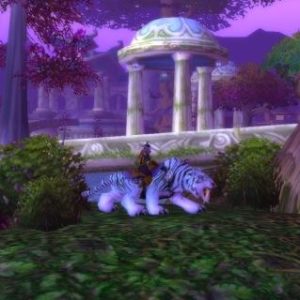 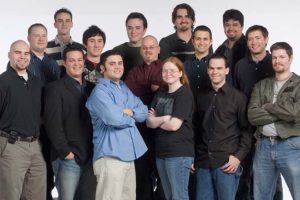 That’s me, the only girl, wearing the classic “Welcome to my World” shirt with the dark portal on it. Kyle is the guy in black next to me, he works at Gearbox now and makes indie games in his spare time.

I applied to Blizzard – and heard nothing back. I got a job at Totally Games and worked on a game that got canceled. Then I got laid off. I applied to several companies, including Blizzard. I got a job at Mind Control Software, which I took 2 days off the first week there – to play the launch of Wrath of the Lich King. I would ship a kids racing mmo and work on two canceled games. I left Mind Control for an opportunity at Sega San Francisco to work on the Iron Man 2 video game. I got laid off 9 months later. Once more, I would apply around, starting with Blizzard. After 5 months of unemployment (and some serious WoW playing) I would get a job at Toys for Bob. Where I was fortunate enough to work on Skylanders. I also ended up dragging several of my co-workers who hadn’t been playing WoW for years back into it. 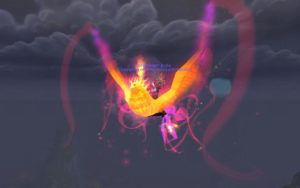 I formed a guild, with my friend who I had met one night pugging him from Trade chat for our guild 10 man run of ICC.

I made 4 Skylanders games and earned a bonus big enough to afford to go back an buy an unopened copy of the original collector’s edition.

As our studio struggled to find a new direction, I was unhappy with the paths being chosen, so I started up that Job Search thing again. As had become tradition, I applied to Blizzard, and then started applying other places.

Only this time, Blizzard called back.

2 months later, I was sitting on the floor in my now empty house, all of my things packed by the movers the day before, with my computer set up on the floor, and watched the opening ceremony of BlizzCon 2017, to see what I would be working on next week. Battle for Azeroth. As soon as the ceremony was over, I would finish packing my car and start driving south, to Irvine.

In the time between 2007 and 2017 – I raided nearly every raid tier from Karazhan to Antorus. I leveled dozens of alts, Alliance and Horde. I won a trip to BlizzCon in 2010 (Thanks Jinx, Steel Series, and Brady Games!). I won again in 2013 – this time just tickets (Thanks WoW Insider – now Blizzard Watch!) I managed to buy tickets 3 other times.

I would go to GDC and watch every Blizzard Panel I could. I would hunt down the developers and ask them questions (Thanks Steve and Scott!). Poor Ion had to put up with me finding him at BlizzCons and at GDC and talking to him about what I was excited about that was happening in WoW.

I bought gear, I collected pets, I bought TCG cards for pets and mounts and toys. Every store mount that went up, I bought. Every pet – yoinked. I got a Figure Print. I got a server blade when they were auctioned. 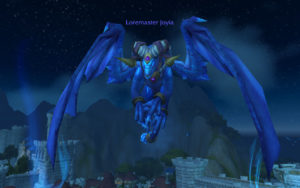 I owe so much to WoW. I got my job at TfB because I wrote a WoWaddon – RememberAll – for tracking things when running all the daily dungeons. My husband and I played WoW together – and that’s when I had a bit too much champagne one night and asked him out on a date… over whispers in WoW. My career, my job, my friends, it’s all due to WoW.

(Note: You’ll notice my blog is mostly about WoW, but with the exception of this post – was written long before I was hired. I do not update this now because I don’t want to run into any issues with our Social Media policy. This is purely as looking back on what Classic and WoW has meant to me.)